I WAS a smoker

I want to share to you about my life as a smoker, and how a little girl changed it all. :)
How it started
At 2002, I succumbed to a very unhealthy lifestyle. It was during my last year on college when I learned how to smoke. At first, it was just a stick. Then it became two. I told myself that I would only smoke after eating lunch with friends. I promised myself that I will not buy a pack because I will only be tempted to smoke even more. But then I lied, I broke all the promises I made to myself; until it became a bad habit to break. I became a chain smoker.
Because it was cool
There was no peer pressure at all, nobody encouraged me to smoke. It was a decision that I made alone. But I admit, I thought it was cool being with friends who smoke, I felt that I belong, I was showing off. I felt like I was a tough girl; that I can do what guys could do. I don’t care what other people think of me, I don’t care if I set a bad example to kids who passes by where me and my friends hang out to smoke. I was PROUD.
The habit
When I woke up, I smoke. Before I eat, I smoke. After I eat, I smoke. When I’m bored, I smoke. When I’m stressed, I smoke. When I’m taking a bath, I smoke. When I’m mad, I smoke. When I can’t sleep, I smoke. Before I sleep, I still smoke. It’s like everything I do, I smoke. Smoking became more frequent when I started working; I found friends who shared the same habit with me, it became one of our bonding sessions. Smoking too became our stress reliever during the 15-minute and lunch breaks. However, it became worst when I got promoted; I can have small trips to the smoking area when I want to, I own my time. I also had a senior who was also a heavy smoker, she would always ask me to accompany her and would happily join her puffing out those cancer stick. 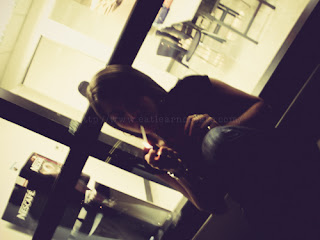 An open secret
Friends, classmates, relatives who are close to me and people in our house knew that I smoke, I trusted them with my open secret. Though, my mother is a smoker and my father was a smoker, still I don't want them to know that I was smoking, especially my father. However, since my mom is a smoker, she noticed it eventually; but there were no talks or confrontations whatsoever.
The health
Ironically, I didn't get cough and colds that much when I began smoking. I was amazed, until I started to feel the effects of smoking. I was starting to have a smoker’s cough, I was gasping for air when I ran up and down the stairs. But what seems to be the most difficult was when I was having shortness of breath; I cannot fill my lungs with air when I breathe deeply. And when I push to breathe more, it was like my lungs won’t take more air; it would go on for days, sometimes weeks. My left thumb was beginning to numb, as far as I remember it went on for a month or two, although I’m not sure if it was related to my smoking but my cousin, who is a doctor, warned me that I should really quit. 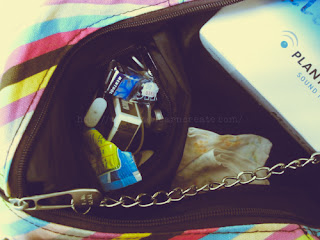 On quitting
I tried several times, but I failed. The longest that I quit was for 3 weeks only, then I would light a stick again. And for more than 2 years of working with my company, I resigned. Staying at home toned down my smoking since I'm away from the famous “smoking area” and my "smoker friends". Happy with being a bum, I only smoked 1-3 sticks per day from my usual half-pack to almost 1 pack a day.
The BIG news
2010, I became pregnant. It was the biggest and happiest news that changed my life forever. After testing positive, I completely stopped. I went on cold-turkey; there was no turning back, no urges, no nothing! I became protective of the little one inside me.
My Prenatal
It was my first time to meet the doctor, there were series of interview about my medical history, allergies, etc. And then she blurted out the million-dollar question
“do you smoke?”
I said "yes I did, before I found out that I was pregnant"
Then she asked me "how many"
I said "1-3 sticks"
Then she checked my tummy, and said that size of my tummy was small compared to the number of weeks that I am pregnant. And she scolded me. She said that we all knew that smoking is bad for our own health, what more for the little one.
Scared for the first time
What the doctor told me hit me bad, for the first time I was REALLY scared of the effects of smoking. I was scared not for myself but for the little life that I had in me. I was scared what the nicotine in my system could do to my little one. I cried!
Moving on
From the day that I learned that I was pregnant up until the day I gave birth, I was praying really hard for my baby to become healthy. Thankfully, I did not encounter any problems during my entire pregnancy. I delivered a healthy baby girl, no complications at all. I was blessed! I was relieved.
She changed it all
My daughter saved me, not only from smoking but from the way I looked at life. She is one of my biggest motivations to stop and not to go back smoking. She is my inspiration on keeping myself healthy. I want to live a long life, I want to see her grow up, graduate, have work, marry, and have kids. I want to be there with her every ups and downs, I just want to be with her. There is no turning back!
To my little girl, thank you for saving me. Thank you for making me decide to live a healthy life. Never again will I go back to my old habit. No promises, but I will DO it; for you, for me, for your dad, and for the whole family. I love you!
* And to this date, I am 5 years, 4 months, 10 days smoke-slash-nicotine-free!!! ^_^ *

Email ThisBlogThis!Share to TwitterShare to FacebookShare to Pinterest
Labels: imported to NAB from AG.com, random